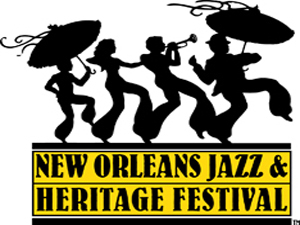 JazzFest began in 1970 and was intended to promote New Orleans, the city that has given more to American music than any other. The first year, it was attended by about 350 ticket-buyers... there were twice as many musicians! However, it grew to be one of the largest festivals in the United States, drawing as many as 650,000 people throughout the week.

LEARN ABOUT OUR GREEN INITIATIVES!
They go much further than our logo!
Click Here to Read More >